Every Halloween for the past decade or so, I’ve built something silly to scare or entertain the trick-or-treaters. Some years it works brilliantly, other years, not so well. But the basic idea is always the same - detect arrival of kids and use sound/light/motion to jump-scare them.

And every Halloween is a last-minute race to assemble electronics, plastic, duct-tape and code. That code is often a horrendous unreliable mish-mash of Arduino, Espruino, Python, Node.js and Bash scripts.

I’ve often thought that more people could easily build things like this if the tools were more approachable and inclusive. Hobbyist electronics and IoT often feels like this classic joke:

Where our version of that is:

So this year, I wondered if it was possible to build something that really worked, but only using No-Code/Low-Code tools for the implementation.

Whilst these tools absolutely don’t make it any easier to understand what a TIP120 is or how an ultrasonic sensor works, they remove one huge chunk of required setup/configuration/deployment/expertise. I’ll talk more about that in a bit.

So what was the project idea?

And what was the actual final setup? 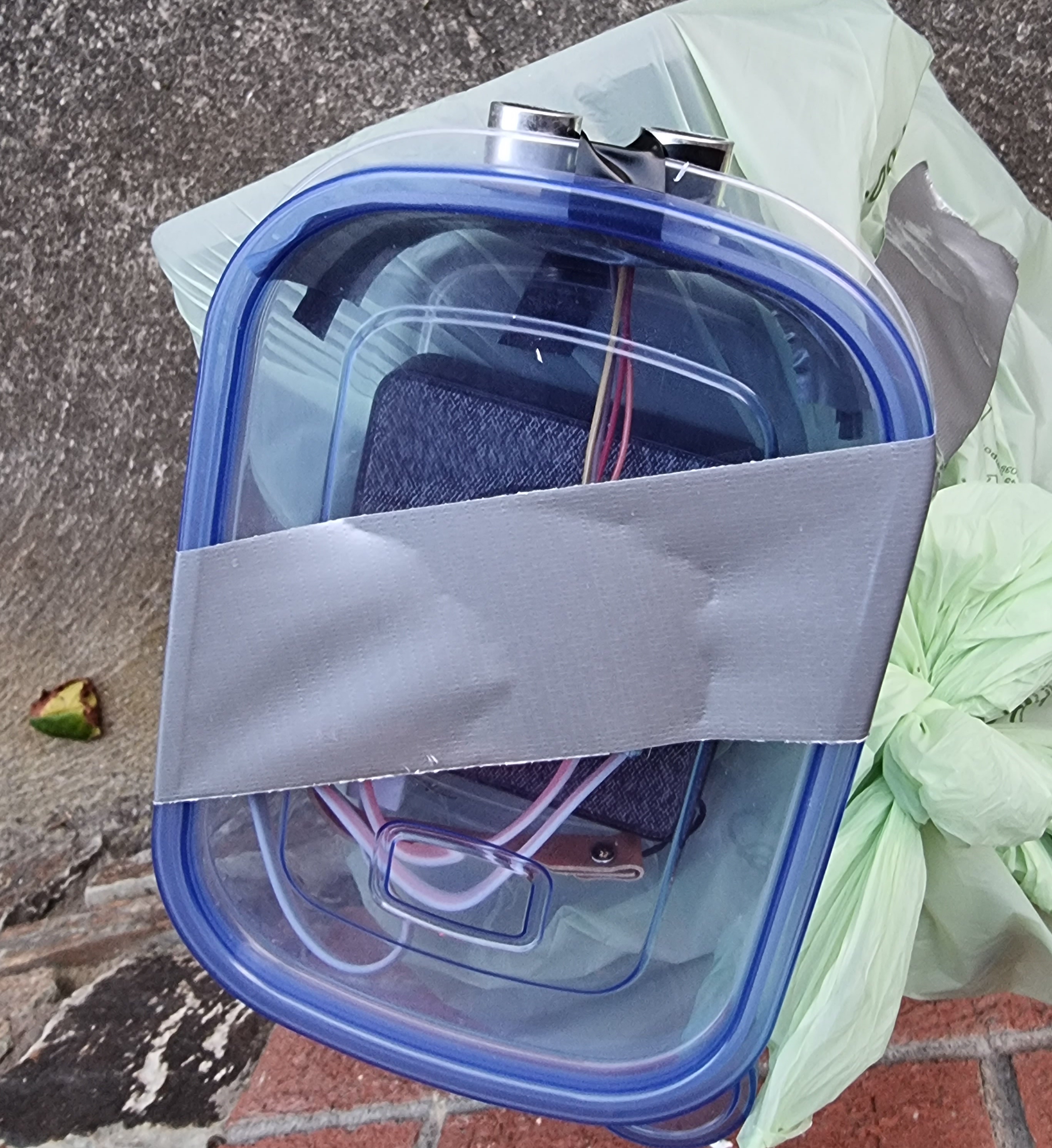 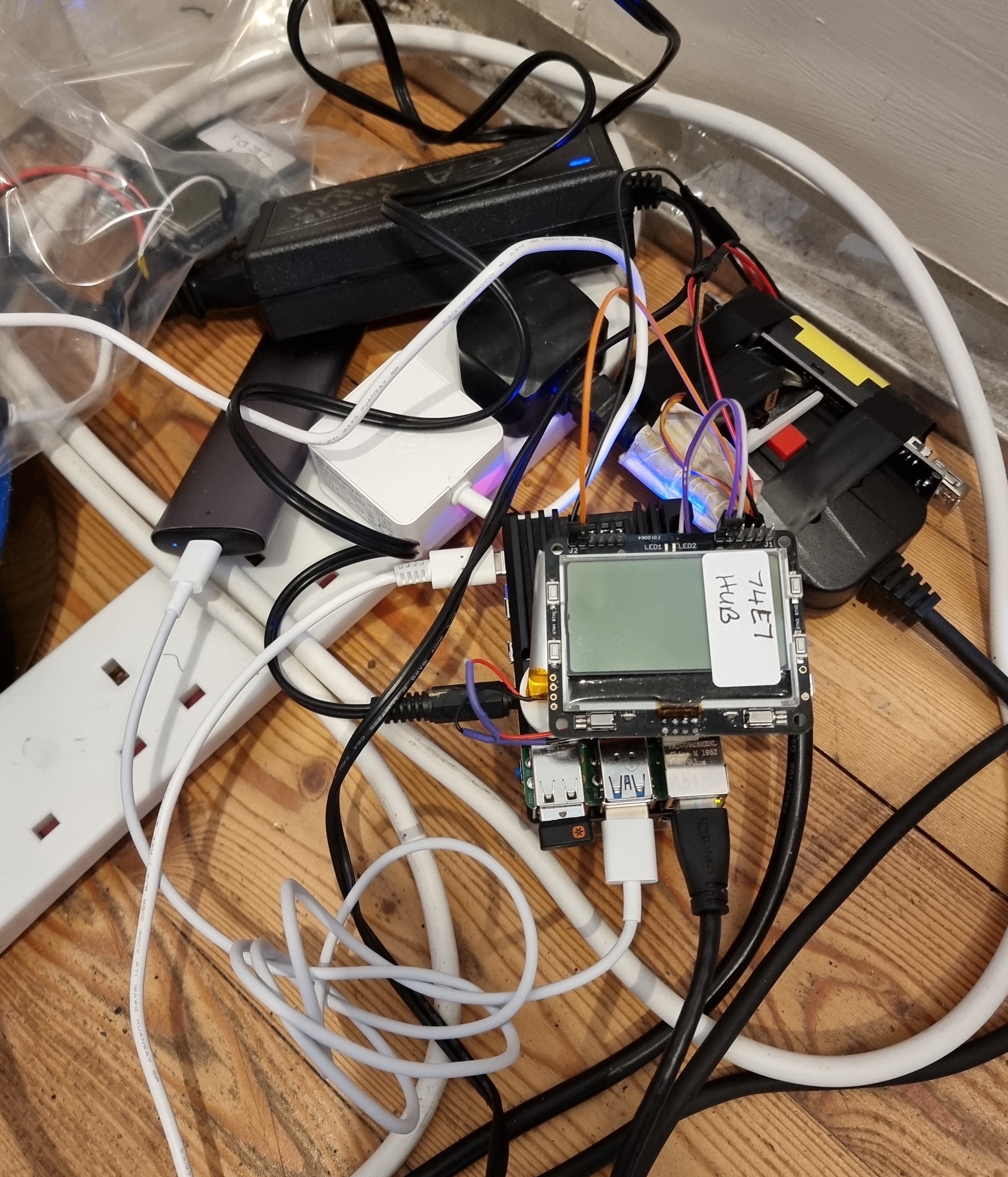 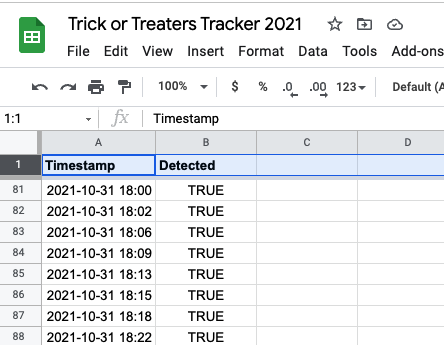 I’ve just realised that there was almost no extra “electronics” required to implement this project. Apart from the boards themselves, standard household items like speakers and extension cables and various powerbanks and power supplies, I had:

Show me the code

But here’s the even cooler thing. I only had to write a single line of “traditional” code to make all of this work. All of the Espruino code was done using Blockly with the exception of the one HTTP request to Node-RED as there isn’t an Espruino Blockly block for that. 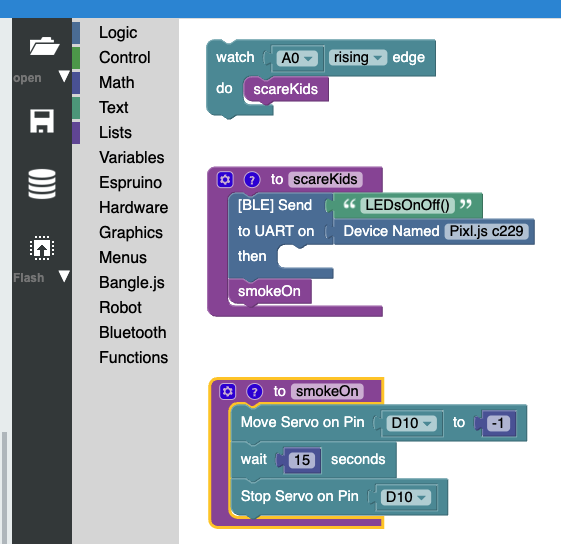 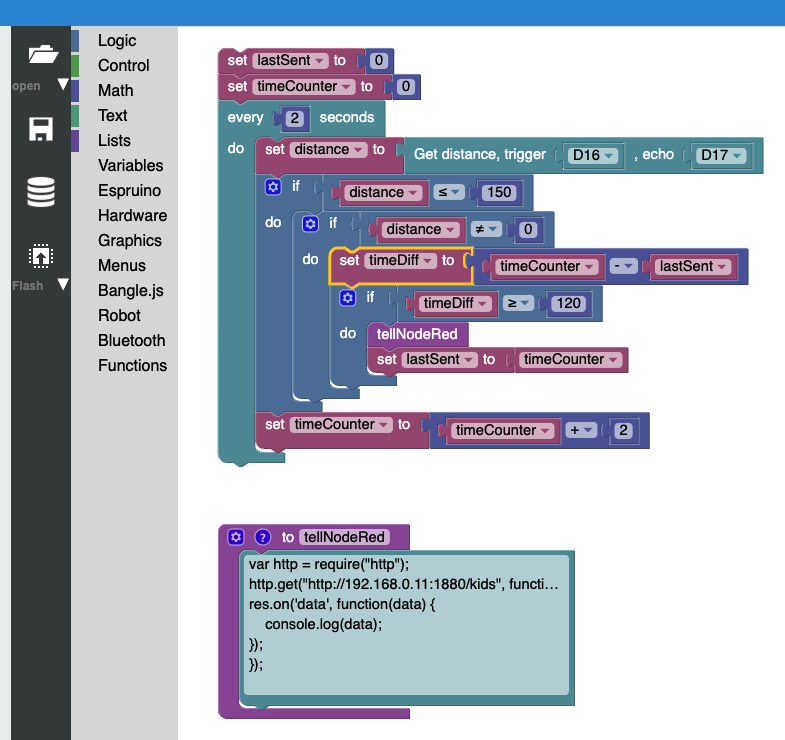 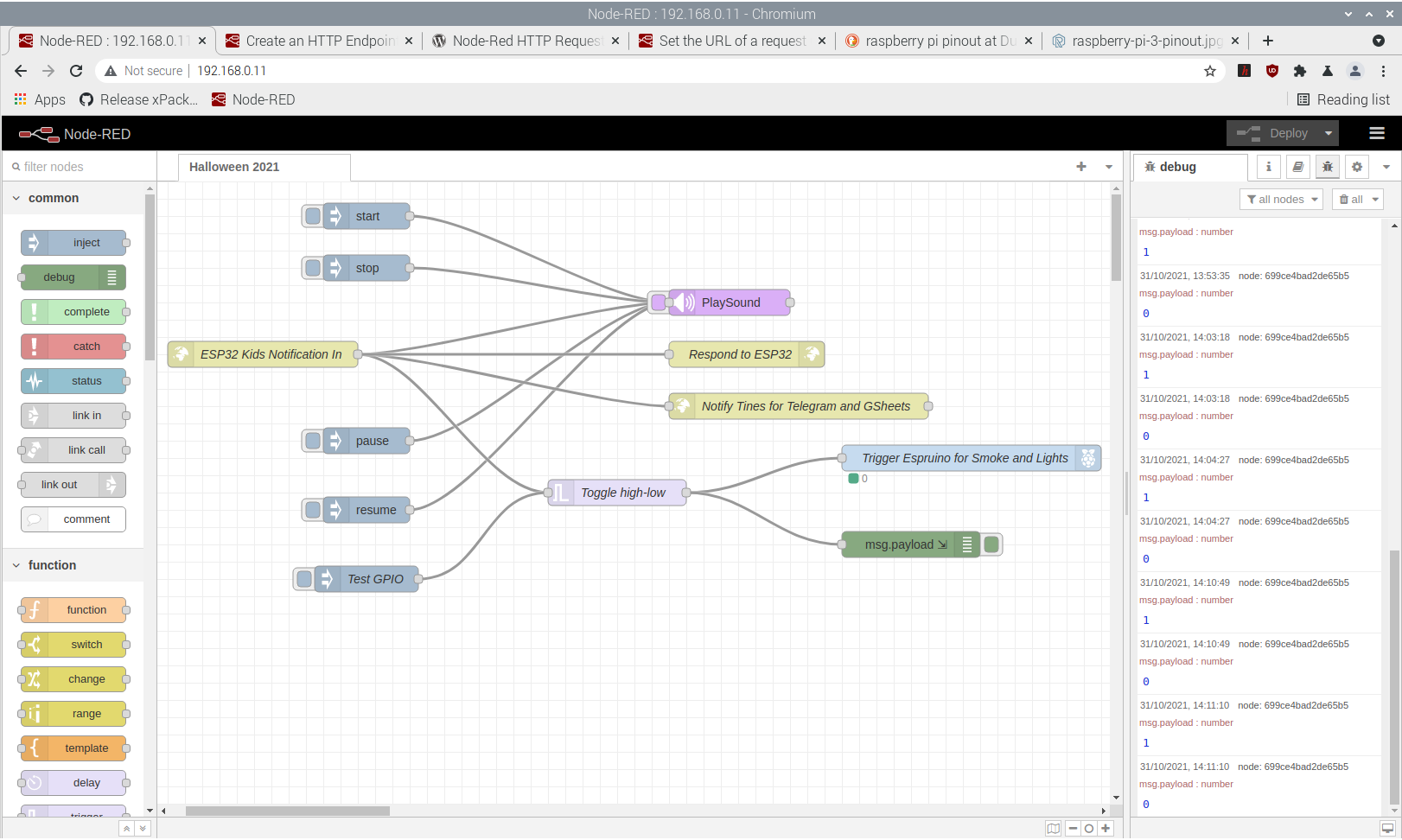 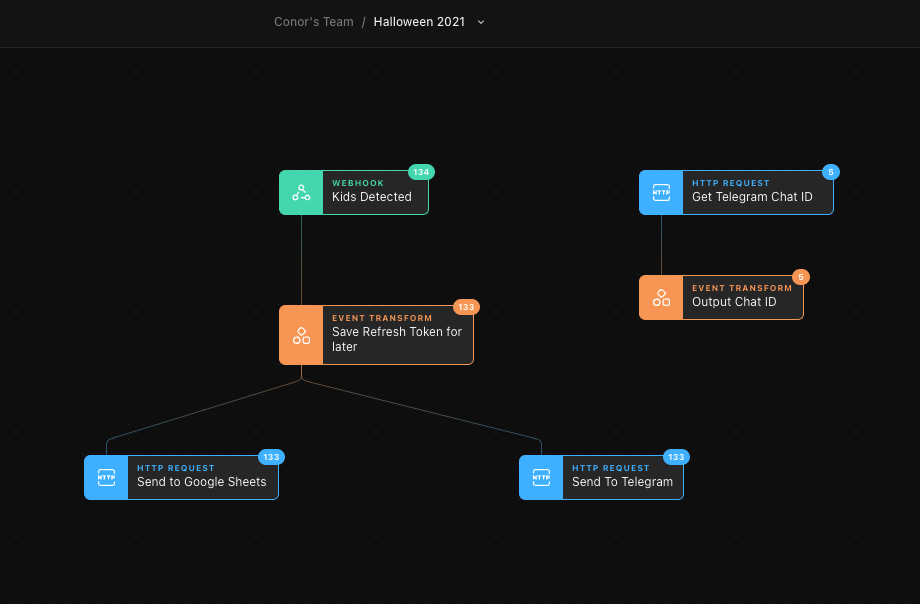 How well did it work?

Espruino + Blockly + Save-To-Flash is an incredibly powerful and easy way to have code in production in minutes that you can power-cycle.

Node-RED, whilst a bit scary initially, is crazily powerful and again enables you to have code in production that you can power-cycle.

Tines (disclosure: I work for them) makes it ridiculously easy to orchestrate and automate things. Whilst my use-case was pretty trivial, I love how easy it is to tie lots of data and event sources together and emit new data and events. For personal projects, I’ll be doing lots more around Telegram bots and data persistence. The fact that Community Edition has all the features I need and is always free, is a big bonus.

Telegram seems to be the only messaging app that welcomes Bots and integrations and has done it extremely well.

No-Code tools don’t imply no-tech. Whatever the vertical, you still need to learn how the technology there works. And in this area there is no getting away from having to learn how various electronic modules are wired up. You may have to install tools or look at the JSON coming back from an API or figure out a simple regex or follow the steps to enable Google Auth.

But what you don’t have to do is worry about the nuances of Arduino vs C++ vs Python vs JavaScript vs Go vs Assembly or how to build/compile/deploy your code or use each MCU vendor’s SDK. And that’s a massive gain for so many people.

I love the idea of being able to hand someone, who is new to hobbyist electronics/IoT, an Espruino device or a micro:bit or a Raspberry Pi Zero along with a few components/wires and know that they could have something far more complex than a blinking LED working in a Low-Code tool the same day.

But we’re not fully there yet. Espruino+Blockly and Edublocks still feel too much like “coding” and they lack a rich ecosystem of community blocks. Bluetooth and Wifi are still a pain in the butt and I wonder if a big push for LoRa is needed. Or some other simple supported protocol to get lightweight data from cheap device to cheap device without ever having to think about the implementation details. We live in a connected world. Flashing an LED doesn’t cut it any more. Flashing an LED remotely in your friend’s house by dragging-and-dropping some blocks, well that’s another thing altogether!

Companies like Adafruit, Sparkfun and Pimoroni have done wonderful work with Open Source Hardware and Software. Adafruit is also leading the charge with software like CircuitPython. It’d be amazing if some common Low-Code/No-Code standard could be created that meant every new hardware module that these companies release had a “Block” available to use in these environments. Even if that means one LCNC tool has to become the winner.